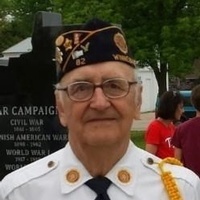 William "Slim" George Reineking, 87 of Winnebago, passed away on September 19, 2018 after a brief illness.  Visitation will be Sunday, September 23, 2018 from 4-6 PM at Spencer-Owen Funeral Home and one hour prior to the service at the church. Funeral will be held Monday, September 24, 2018 at 11 AM at the River of Life Worship Center in Blue Earth. Interment will follow in Center Creek Cemetery, rural Granada. Spencer-Owen Funeral Home is entrusted with arrangements.  www.SpencerOwen.com

He was born August 31, 1931, in Winnebago. The son of William and Helen (Lux) Reineking. He resided in the Winnebago area for most of his life.

Slim graduated from Huntley High school in 1949 and the University of Minnesota in 1951. Slim was a US Army Korean war veteran stationed in Germany.  He married Diana Lee Grant on August 31, 1956 and they made their home in Winnebago, where they farmed for many years. He also worked at Helland Lumber Company in Huntley and Royer's Plumbing and Heating in Winnebago. He was a Sergeant at Arms, and a Past Commander for the Winnebago Legion Post as well as a caretaker of the Veterans Memorial. Slim had a passion for bowling and was the secretary for the league for over 40 years. He donated over 13 gallons of blood to the American Red Cross, something he was honored to do until his cancer diagnosis prevented him from continuing. He was an avid nature lover and loved to deer hunt. As a past member of the sportsman's club, he worked at many Smelt feeds and corn feeds. 30 years ago, his father-in-law passed on to him, the caretaker role over three area cemeteries.  Slim could be found every Wednesday sitting on the same stool at Shooters Bar in Winnebago, surrounded by his "family" of BINGO players where he had many lucky wins.

He was preceded in death by his parents, infant brother, brother, John (Lorene); brother-in-law, Howard Enderson; nephew, Mark Enderson; many aunts, uncles and other relatives.

To order memorial trees or send flowers to the family in memory of William "Slim" Reineking, please visit our flower store.