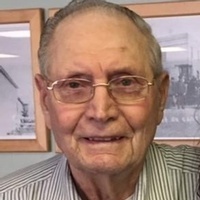 Willard “Willie” Lantz, age 92 of Mapleton, left this world surrounded by his family, on April 12, 2019 at Mayo Clinic Health Systems in Mankato after a short illness. Visitation will be held Monday, April 15th, from 5-7 pm at the Spencer-Owen Funeral Home in Winnebago, also one hour prior to services at the church. Funeral services will be held Tuesday, April 16th, at 10:30 am at the Faith Lutheran Church in Delavan with Pastor Todd Substad officiating. Burial will follow, including military honors at the East Lutheran Cemetery Delavan.  Spencer-Owen Funeral Home is entrusted with the arrangements.   www.SpencerOwen.com

Willard Laverne Lantz was born September 2, 1926 in Delavan, Minnesota to Ward and Joyce (Meixell) Lantz. His parents farmed in Southern Minnesota.   Growing up, Willard attended several schools. He graduated from Mapleton High School.  During WWII, from 1943-1946, Willard served in the US Navy aboard the USS Elkhart, as a Seaman 1st Class. Upon return, he attended Mankato Commercial College earning a degree in Accounting.

Willard married Neva Stevens in 1947 and they were married for 48 years. To this union there was one child born, Kathryn Pauline Lantz.  They continued farming in the Delavan area.  Neva passed away in 1995.

Willard met Pearl (More) Carey, they were married August 29, 1998. Willie continued to farm for a few more years. After retiring, he enjoyed playing cards, bowling, (which he had bowled a 300 game at the age of 75), watching all sports and golfing-he was an all-around athlete.  He was very competitive-there wasn’t a game he wouldn’t win. He especially enjoyed the fishing trips up north to Lake Winnibigoshish.  The thing Willie enjoyed the most though, was spending time with his children and grandchildren, whom he adored.

To order memorial trees or send flowers to the family in memory of WIllard Laverne Lantz, please visit our flower store.