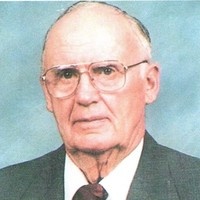 A funeral service for Veril Dean Conrad, 92 of Vernon Center, will be Friday November 8, 2019 at 11:00am at Grace United Methodist Church in Vernon Center with Rev. Dan Foster officiating. Visitation will be from 9:30 until the time of service. Interment at Vernon Center Cemetery.

Veril passed away on Tuesday Nov. 5, 2019 at Mayo Clinic Health Systems, Mankato. Spencer-Owen Funeral Home of Winnebago is entrusted with the arrangements. www.SpencerOwen.com

Veril Dean Conrad was born on October 16, 1927 in Vernon Center to Benjamin and Augusta (Nagel) Conrad. He attended Garden City School and graduated in the class of 1945. Veril served his country from 1946-1947 in the United States Army during WWll and was stationed in Japan. After his honorable discharge he started his own trucking business “Conrad Trucking”. Veril married Doris Urban on June 20, 1964 at St. John’s Lutheran Church in Willow Creek. They were blessed to be married 55 years. Together they ran Conrad Trucking and hauled livestock for 50 years.

Veril kept active after retirement recycling scrap metal and he and Doris would often take home the scrap metal from many auctions. He also enjoyed wood carving and created small figures. He was an active member in the Amboy Lions Club and the American Legion. Veril was a lifelong member of the Vernon Center United Methodist Church.

In lieu of flowers, memorials may be made to the charity of your choice.

To order memorial trees or send flowers to the family in memory of Veril Dean Conrad, please visit our flower store.