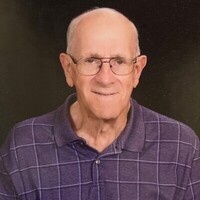 Anthony (Tony) Joseph Alleven, age 85, of Winnebago, died October 8, 2021 at Mayo Clinic Health System in Mankato, with his wife and daughters by his side. A Mass of Christian Burial will be Friday November 5th at 11AM at St. Mary's Catholic Church with Fr. Gregory Parrott officiating. Visitation will be one hour before the service and burial will be at St. Mary's Catholic Cemetery in Winnebago.

Tony was born June 10, 1936 in Good Thunder, MN, the son of Anton and Bertha (Gillas) Alleven. He graduated from Huntley High School in 1954. Following high school, he joined the Army and served for two years. On June 13, 1964 he married Leta Lust at St. John’s Catholic Church in Mankato. They made their home on the family farm near Huntley.

Tony farmed for many years, while also working construction. He loved farming and took great pride in his weedless crops. Tony and Leta welcomed four children, who he loved greatly and taught the value of hard work and respect. He was proud of his Dutch heritage and was able to travel to Holland with his cousin Hank in 2001. He absolutely loved that trip and shared many memories over the years. Upon retirement, riding bike became his favorite form of exercise, as well as an excuse to stop and chat with anyone and everyone along the way. Tony loved to take day trips to visit family and friends, but home was his favorite place to be…living the simple life.

Interment will be at St. Mary’s Catholic Cemetery in Winnebago.

To order memorial trees or send flowers to the family in memory of Tony Alleven, please visit our flower store.