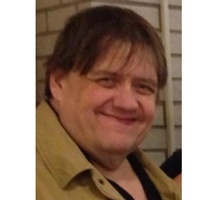 Todd Melvin Poole, age 56 of Blue Earth, died Wednesday, July 12, 2017 at St. Mary’s Hospital in Rochester.Funeral services will be 10:30am, Saturday, July 15, 2017 the Community Covenant Church of Huntley, with Rev. Delmar Burgess officiating. Visitation will be held one hour before the service at the church. Interment will be held at a later date in Riverside Cemetery in Winnebago.Todd was born April 8, 1961 in Hutchinson, KS, the son of Melvin Poole and Florence (Kogel) Wishman. He graduated from Ottumwa High School, Ottumwa, IA in 1979, where he was a nationally competitive debater and straight “A” student. He attended the University of Northern Iowa on scholarship where he was a nationally competitive college debater. He graduated in 1983 with a degree in Economics. From 1983 to his death he was the office manager of a successful family owned transportation business in Fort Worth, TX and Blue Earth, MN. He lived for several love and happiness filled years with his fiancé Dawn Davis who preceded him in death in 2012 in Blue Earth.He was a prodigious reader by the age of 4. He was deeply involved in computer technology from its infancy. He loved to watch football with his family. Above all he had a deep love and commitment to his parents and to each of his nieces and nephews.Todd is survived by his mother and stepfather, Florence (Don) Wishman of Huntley, step-mother, Judy Poole of Ottumwa, IA, brothers, Scott (Jenny) Poole, Steven Poole both of Ottumwa, IA, sister, Bonnie Poole of Shalimar, FL, step-brothers, Tom (fiancé Debra) Wishman, Russ (Barb) both of Boone, IA, step-sister, Donna (David) Miles of Woodstock, VT, numerous aunts, uncles, nieces, nephews, and cousins.He was preceded in death by his father, Melvin Poole, uncle, Phillip Kogel, and grandparents.In lieu of flowers memorials are preferred to the Epilepsy Foundation of Minnesota in memory of his fiancé Dawn Davis.
To order memorial trees or send flowers to the family in memory of Todd Melvin Poole, please visit our flower store.