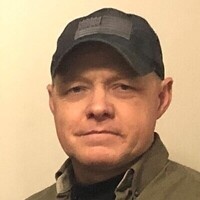 Sheldon was born Feb. 12, 1967, in Winnebago, MN to Lloyd and Deanne Wallace. He graduated from Delavan High School in 1985.

Sheldon worked with his father, Lloyd at Wallace Interior/Exterior Decorating, then as a self-employed painter, and later drove semi’s hauling fuel.

Sheldon enjoyed shooting, buying and selling guns, cruising the country on his motorcycle, and spending time with family and friends.

Sheldon is survived by his father Lloyd; sisters , Denise (Michael) Schuster of Easton, and Melanie (Michael) Staloch of Columbia, MO. Three nieces and one nephew; two great-nephews and one great-niece.

The visitation honoring the lives of both Sheldon and his mother Deanne will be held on Saturday, Feb. 5 from 4:00-7:00pm at Spencer Owen Funeral Home in Winnebago. The funeral service will be held Sunday, Feb. 6 from 12:00-1:00pm, followed by the service at 1:00pm at Hope United Methodist Church, Blue Earth. Burial will take place at a later date in Rice Lake Cemetery.

In lieu of flowers, memorials may be sent to Center Creek Gun Club, or charity of choice.

To order memorial trees or send flowers to the family in memory of Sheldon Wallace, please visit our flower store.