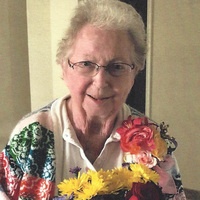 Sharon Rose Jenkins, 77, passed away in her sleep on Friday, December 20, 2019 at the Clarkson Mountain View Health Care Facility in Rapid City, SD.

Sharon was born June 7, 1942 to Wayne L. and Dorothy (Hamelau) Whiteford in East Chain Township Martin County, MN growing up on the farm near Winnebago, MN. She attended school in Winnebago and graduated in 1960. She then attended Gustavus Adolphus College in St Peter, MN and graduated with a Teaching Degree in math and science.

Sharon married LeRoy Jenkins on September 26, 1964 in the British Territory of Gibraltar with a ceremony following in Rota, Spain and resided at Rota Naval Base in Spain.  Upon his honorable discharge from the Navy, they moved back to the United States. Sharon continued her teaching career and in 1966, they were blessed with the birth of their son, Dean.

Sharon was active in the local garden club, the church circle and became a 4-H Leader starting the Verona Club of which Dean became a member of. She was well known for starting her knitting business, making lots of sweaters, scarves, mittens, caps, etc.

After LeRoy passed Jan 2018, Sharon moved into assisted living, first in Winnebago, then Mankato and ending in Rapid City, SD to be closer to her son and family.

To order memorial trees or send flowers to the family in memory of Sharon Jenkins, please visit our flower store.