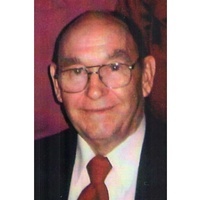 Raymond E. Sickler, age 91, of Delavan, passed away peacefully on March 11, 2018 at United Hospital District in Blue Earth. A funeral service will be held on Saturday, March 17th at 1:00 PM at Faith Lutheran Church in Delavan. Visitation will be on Friday from 5:00pm-7:00pm at Spencer-Owen Funeral Home in Winnebago and one hour prior to the service at the church. Web tributes may be left at www.spencerowen.com Ray was born May 29, 1926 in Delavan, Minnesota to Glen and Gladys (Grandin) Sickler. On January 24, 1946 he married Dolores Bogenschutz. He farmed with his dad. He drove school bus for several years for the Delavan Public School. Ray enjoyed entertaining for nursing home residents with his musical keyboard and singing. He was an excellent dancer and would take every opportunity he could to be on The Bandwagon. He enjoyed playing cards.  He also played in many checker tournaments in his younger years. Ray is survived by his children; Loretta (Rick) Ascheman, Lorraine (Ole) Braaten, Gail (Gary) Hagert, Yvonne (Perry) Smith, Lawrence (Pam) Sickler, son-in-law Tom Sailor, 17 grandchildren, 30 great-grandchildren, 3 great-great grandchildren, sisters Lola Molohon, Maurine Hamelou, Lillian Touple, brother Wayne Sickler.  He is preceded in death by his wife, Dolores, daughter Sisty Sailor, and granddaughter Melissa Ascheman-Davis
To order memorial trees or send flowers to the family in memory of Raymond Edward Sickler, please visit our flower store.