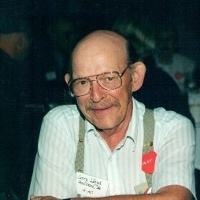 Myland “Jerry” Charles Lloyd, age 78 of Hammond, WI and formerly of Amboy, MN passed away Monday August 12, 2019 at the University of Minnesota. A visitation will be held at Trinity Lutheran Church in Hammond, WI Thursday August 15 starting at 4 pm with a prayer service at 6:30pm.
Funeral services will be Friday August 16 at 2pm at Jackson Lake Lutheran Church in Amboy with
Rev. Arlen Lloyd officiating. Visitation will be one hour prior to the service at the church; followed by a luncheon. Burial to follow at Vernon Center Cemetery with military honors.

Jerry was born January 10, 1941 in Mankato, MN to Ralph and Ima (Buckmeister) Lloyd, one of sixteen children. He attended Amboy schools and then joined the Navy. He worked on boilers while aboard the ship and travelled the world including Italy, Spain and Japan. He was stationed on the USS Franklin D. Roosevelt during the Cuban Missile Crisis. He was also a Golden Glove boxer during his Navy days.

He had a great sense of humor and was a hard-working man who taught his family the same values. His sarcastic sense of humor always caught people off guard. As a dual organ transplant recipient (2001 heart, 2013 kidney), along with numerous medical procedures and illnesses, he amazed us with his tenacity for life.

Jerry worked for 3M for 20 years as their fiber optics expert, traveling around the country as fiber optics became the leading edge of technology. After leaving 3M he held different jobs, jack of all trades. His biggest passion though was farming. Upon moving to Wisconsin he bought a farm and farmed it with the utmost pride until the end.

He is preceded in death by his parents, his brothers Arlo, James, Dale, Joe and Merlyn “Tom”; sisters Nyla, Lois and Aletha.

To order memorial trees or send flowers to the family in memory of Myland (Jerry) Charles Lloyd, please visit our flower store.