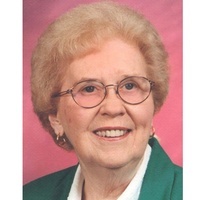 Mildred Lyal (Roberts) Davis was born July 18, 1926, in Amboy to R. Joe and Margaret (Ellis) Roberts.  To almost everyone other than her mother, she was always "Millie."  Millie graduated from Amboy High School and then from Mankato State Teachers' College with a teaching degree.  On August 16, 1947, she married Dwight R. Davis.  They lived in the Rosemount area for two years while she taught English at St. Paul Park and Rosemount High Schools.  They returned to Amboy, where Dwight began farming and she was a stay-at-home mom to their daughter, Jodell.  In 1958 she returned to teach Spanish at Amboy High School on a part-time basis; then she became a full-time teacher, teaching English, Spanish, and speech.  Millie taught in Amboy through 1987; in the later years she found herself teaching the children of parents who were earlier students of hers.  Teaching was her life, and the students were special to her; she was proud of all of them and all they had done and kept in touch with many over the years.   Millie lived most of her life on the farm in Sterling Township near Amboy.  Although she wasn't one to get out in the fields and work, she had a deep connection to the land.  Farming and the land were always special to her, so she checked the crops and worried about the weather, as farm people do.  Millie was a member of the Sterling Community Study Club and Amboy Lions' Club.   Millie was preceded in death by her husband, Dwight Davis;  son-in-law, Mike Kruse; father, R. Joe Roberts, and mother, Margaret Roberts; brother, Kenneth Roberts; sister-in-law, Bernita Roberts; and nephew-in-law, Jim Otting.   Millie is survived by her daughter, Jodell Kruse; nieces, Marilyn Aspen (Frank), Joann Otting, and Donna Smith; great nieces and nephews, Melissa, Brian, Blake, Kelsey, Sarah, Rachel, Luke; their families; and many friends.
To order memorial trees or send flowers to the family in memory of Mildred Lyal Davis, please visit our flower store.