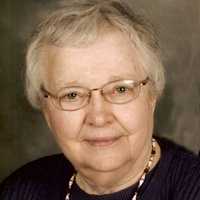 Mary Ann Hatteberg, age 97, passed away peacefully on Thursday, January 13, 2022 at Mapleton Community Home in Mapleton. Private family services will be held at Faith Lutheran Church in Delavan. Burial will be in East Lutheran Cemetery, Delavan. Spencer-Owen Funeral Home in Winnebago is assisting the family with the arrangements. Web tributes may be left at www.spencerowen.com

Mary Ann was born on September 25, 1924, on the farm in Lura Township to CJ and Theresa (Studness) Hansen. She attended Delavan High School. Mary Ann then went on to obtain a four-year degree from St. Olaf College. On August 22, 1959, Mary Ann married Lester Hatteberg in Mankato. The couple settled on the farm outside of Delavan and raised their family.

Mary Ann was a member of Faith Lutheran Church in Delavan and was very active in the church. She was also a member of the American Legion Auxiliary. Mary Ann enjoyed being a homemaker and taking care of her family. She was an avid reader. Reading was Mary Ann’s favorite pastime. She loved her family dearly, and she will be missed.

She is preceded in death by her husband Lester in 2011; her parents; brothers, Henry, John, Harland, Franklin, and Jerome Hansen; sister, Ruth Steferud; son-in-law, Bob Stivers; and infant daughter.

To order memorial trees or send flowers to the family in memory of Mary Ann Hatteberg, please visit our flower store.