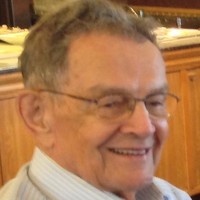 Marshall Merton (“Mert”) Messer, age 95, died on November 8, 2019, at St. Luke’s Care Center in Blue Earth, MN.  A memorial service in celebration of Marshall’s life will be held at 2pm Tuesday November 19 at Spencer-Owen Funeral Home with visitation one hour prior to the service.  Burial will be at Riverside Cemetery, Winnebago.  Spencer-Owen Funeral Home in Winnebago is assisting the family with arrangements.

Marshall Messer was born at Winnebago, Minnesota on February 3, 1924, the son of John and Irene (Nichols) Messer.  He was raised in Winnebago, graduating from Winnebago High School in 1942.  Mert served his country with valor as a World War II combat veteran in the US Army from 1942 to 1946, making 5 separate island landings in the South Pacific theatre.  Upon his return from the war, Mert married Lorraine Haight and they enjoyed 64 wonderful years together.  Mert worked for Roerig Hardware for several years before starting his own business, Messer Refrigeration and Appliance, where he built a loyal customer following in southern Minnesota and northern Iowa.  He retired in 1989 and thoroughly enjoyed retirement, traveling the US with Lorraine and spending time with family and treasured friends.

Marshall was preceded in death by his wife Lorraine, his parents, daughter Sandy Cone, brothers Jack and Vernon Messer, and sister Margaret O’Grady.

In lieu of flowers, memorials to St. Luke’s Care Center, Blue Earth, MN where he received wonderful care or the Salvation Army (give.salvationarmyusa.org), who Mert always said made all the difference to the soldiers during the war would be greatly appreciated.

To order memorial trees or send flowers to the family in memory of Marshall Merton Messer, please visit our flower store.