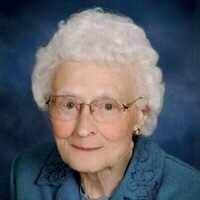 LuVerna Helen Ida Hendricksen was born on December 20, 1917 in Nashville Township, Martin County.  She was the daughter of Edward Sr. and Paulina (Buckholz) Hendricksen. She attended St. Paul’s Lutheran Parochial School in Truman. LuVerna was confirmed March 29, 1931 by Rev. Herman Heine. She attended country school district 24 in Martin County and graduated from Truman High School on May 28, 1936.

After graduating from high school, she went to Mankato Beauty College. She worked in La Doris Beauty Shop in Truman until she married Miles B. Boler on March 14, 1943. They made their home in Winnebago Township, Faribault County.  There she and Miles lived and farmed until moving to Winnebago on August 6, 1971. They famed until Miles became ill and passed away May 4, 1974.

LuVerna was a faithful member of Basey UMC, holding several offices of the UMW, she taught Sunday School and attended Annual Conferences, plus Volunteered for the Parker Oaks Home and KJLY etc. God and Family were always first. She loved them very much! She also did various traveling trips.

She was preceded in death by her parents, husband Miles and infant son Alanson Edward Boler, 5 brothers and 3 sisters.

In Lieu of flowers, memorials are preferred to donor’s choice or to the Basey Methodist Cemetery Association.

To order memorial trees or send flowers to the family in memory of Luverna Boler, please visit our flower store.