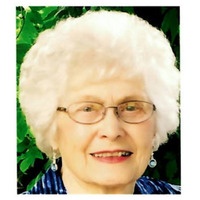 Lucy’s parents, Rocco and Angela (Lopardo) Lorusso, immigrated from Italy to the United States in the early 1900’s, settling in New Rochelle, New York.  Lucy was born there on July 21,1926. As a teenager and young woman, Lucy enjoyed going into Manhattan with her girlfriends to Radio City Music Hall, where she saw big band singers like Frank Sinatra, Ella Fitzgerald, and many others. She met Kenneth Irvine, who was from Amboy, Minnesota, at a USO dance. They married in 1948 and moved to Minnesota, where they raised five children, and were married for 70 years. She worked at Norman’s Cafe, and was an active member of St. Matthews Catholic Church, the Lion’s Club, and Sterling Study Club. Lucy was Ken’s partner in Irvine Sand & Gravel, acting as business manager/bookkeeper. She enjoyed cooking, sewing, canning and freezing, and had a great love for animals. Nothing brought her as much love and joy, however, as her family, including her grandchildren, in whom she took great pride.

She is preceded in death by her parents, husband Ken, three brothers, one sister, and son-in-law Mark Leagjeld.

In lieu of flowers, the family requests that donations be made to the Amboy Lions Club or St. Matthew’s Catholic Church.

To order memorial trees or send flowers to the family in memory of Lucy Irvine, please visit our flower store.