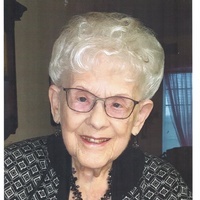 Lila moved with her mother from Truman to Winnebago, Minnesota when she was a junior in high school.  She graduated from Winnebago High School in 1947. Lila married Kenneth Hugh McKay on July 18, 1947.  They were married 60 years and raised five children on a farm east of Winnebago. The couple resided on the family farm until 1993 when they moved to Winnebago.

Lila loved music and she was active in music in high school.  She directed the Chancel Choir of the First Presbyterian Church in Winnebago for 20 years.  After moving to the Twin Cities, Lila directed the choir at Beacon Hill in Minnetonka.

Lila followed the Minnesota Twins and attended many Friday evening games at Target Field. She enjoyed participating in activities throughout the Twin Cities with her family. Lila attended Christ Presbyterian Church in Edina.

In lieu of flowers memorials are preferred to the First Presbyterian Church in Winnebago, MN, Bass Lake Cemetery Association in Winnebago, or charity of the donor’s choice.

To order memorial trees or send flowers to the family in memory of Lila Mae McKay, please visit our flower store.