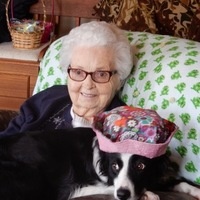 A funeral service will be held on Thursday, November 21, 2019 at 11:00 a.m. at Lutheran Church of Our Savior in Winnebago, Minnesota with visitation one hour prior to the service. Burial will take place at Hillside Cemetery.

LaVera was born on January 16, 1930 to Rosa (Behrens) and Gustav Kutnink in rural Fraser Township, Minnesota. She graduated from Fairmont High School in 1948. After graduation she was employed as a clerk in a bank.  LaVera was united in marriage to Donald Claeys on February 25, 1951.  They resided on a farm in rural Winnebago, Minnesota.

LaVera was employed in many jobs off the farm –  line worker at Stokely Van Kamp, clerk at the local grocery store, bookkeeper at the local grain elevator, line worker for several manufacturing firms, cook for the Legion Clubs in Winnebago, Easton and Amboy, clerk for several gas stations as well as a small upholstering business from her home.

Her hobbies included gardening, quilting, reading and doing puzzles.  LaVera attended our Savior’s Lutheran Church in Winnebago, Minnesota and enjoyed making baby quilts for new babies in the church. In 1995 LaVera was also certified as an EMT and served on the Winnebago ambulance crew.

To order memorial trees or send flowers to the family in memory of LaVera Jeanette Claeys, please visit our flower store.