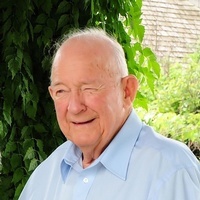 Kenneth Albert Irvine, 92, died March 2nd, at his home, surrounded by his loving family. A funeral mass will be Thursday, March 7th at 11:00am at St. Matthew’s Catholic Church in Vernon Center, MN. Visitation will be held Wednesday, March 6th from 4:00pm to 7:00pm at Spencer-Owen Funeral Home of Winnebago and also one hour prior to the service at the church. Burial will include military honors at St. Matthew’s Church cemetery. Spencer Owen Funeral Home is entrusted with arrangements. Www.SpencerOwen.com

Ken was born on November 17th, 1926 in Sterling Township in Blue Earth County to Harry and Bernice (Nienow) Irvine. He graduated from Amboy High School in 1944 and served in the Army Air Force for three years. On November 27, 1948, Ken married Lucy Lorusso in New Rochelle, NY. Ken and Lucy settled in Amboy, MN, where he farmed for many years.

In 1961, Ken opened Irvine Sand & Gravel with one farm loader; ten years later, the business had two full-time and one part-time employees, two industrial loaders, two cat tractors, and three trucks. His son Brian took over the business in 1986, though Ken continued to provide invaluable help when needed.

Ken was a member and commander of Jennings American Legion Post 276 and served on the Amboy School Board and the Amboy City Council. In 1981 Ken encouraged 23 of his friends to join him in chartering the Amboy Lions Club. Over the next 35 years he received numerous Lions Club awards, and was influential in founding the Winnebago Lions Club. Ken was inducted into the Lions Club Hall of Fame in 2016.

Together Ken and Lucy loved, supported, and celebrated many events with their family. Ken enjoyed watching the Minnesota Vikings and Twins, fishing, reading military history, and socializing.

Ken was preceded in death by his parents, brothers Durward and Woodrow, two infant siblings, brother-in-law Harold, and two sisters-in-law, Betty and Irete.

The family requests that memorials be sent to Amboy Lions Club, Mayo Hospice, or the charity of your choice.

To order memorial trees or send flowers to the family in memory of Kenneth Albert Irvine, please visit our flower store.