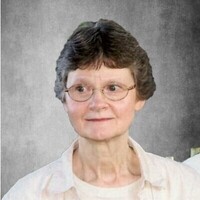 Judy Kay Yeager, age 72, of Winnebago passed away on September 20 at Parker Oaks Senior Living in Winnebago. A memorial service will be held at 2 p.m. Wednesday, October 6, at the Community Covenant Church of Huntley with Rev. Daren Barnett officiating. Visitation will be held on Tuesday, October 5, from 4-7 p.m. at the Spencer-Owen Funeral Home. Burial will be at Riverside Cemetery in Winnebago.

Judy was born June 19, 1949, the daughter of Ira and Margaret (Franson) Hill. She grew up with five brothers and three sisters on a dairy farm west of Winnebago along the Blue Earth river. As a child she worked with her siblings doing chores on the farm. Occasionally, as an adult she would talk about the fun times she had with her brothers and sisters and sometimes how challenging it was to grow up with so many siblings. In 1967 she graduated from the Winnebago High School. Her first job after graduating was at the Baptist Home for Seniors which years later became Parker Oaks Senior Living which ironically is where she spent her final weeks of life. She married Marvin Yeager in October of 1974 and in 1984 became the mother to their daughter Jenna Kay.

Judy found peace of mind living in the rural countryside. She liked to take walks outside to get fresh air and to see what Mother Nature was up to or to just retrieve the mail from the mailbox. In the winter she was always happy to see the ground covered with a fresh blanket of snow. Judy enjoyed bird watching; the red cardinals were her favorite. In the spring she would wait impatiently for the new tulips to appear.

Judy dedicated much of her free time to writing and cooking. Like her mother, Judy enjoyed writing poems many of which were of a spiritual nature depicting her belief in the Lord’s benevolence. Cooking was her passion as can be determined by her significant collection of cookbooks. She was always trying a new recipe or modifying an old one. Every fall she would pick apples from the tree to make apple pies. Then family members were invited over for her annual “apple pie party.” Even her sister from Florida would attend.

Judy was preceded in death by both parents Ira and Margaret; brothers-in-law Richard Roberts and Dennis Swanson; sisters-in-law Susan Hill and Shirley Hill.

To order memorial trees or send flowers to the family in memory of Judy Yeager, please visit our flower store.