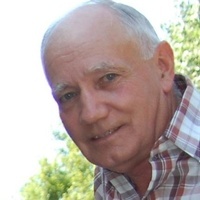 John Thomas Mack, of Amboy, passed away on Friday, October 13, 2017.  He was born on April 28, 1946 in Mankato, to Emma (Bowles) and Mark Mack.  John was baptized at St. Peters Lutheran Church in Vernon Center and confirmed at Trinity Lutheran Church in Truman. He was a 1964 graduate of Amboy High School and had a lifelong career as a farmer.  He was married to Gloria Wilde on September 9, 1967, having just celebrated their 50th Wedding anniversary last month.  Saying that John was active in his church and community is a huge understatement.  With the Jackson Lake Lutheran Church he served as head usher and fulfilled his 4-year term as church treasurer many times over.  He was the Shelby Township Clerk for over 30 years, the Treasurer for the Amboy-Good Thunder Alumni Association for many years and the Chairman of the Board of the Vernon Center Cemetery Association for almost 40 years.   John loved taking time to go snowmobiling and doing many farm chores with his son Ken. He also cherished the time he spent with his twin grandchildren feeding the birds and tending to the sheep. In recent years John enjoyed taking road trips with Gloria in their Corvette. John is survived by his wife Gloria; son Ken (Missy) Mack; grandchildren, Emma Jade Mack and Aaron John Mack; brother, Ivan (Lois) Herrlich, and brother-in-law, Glenn Putrah.  He is preceded in death by his parents, and sister, Betty Putrah. Memorials may be directed to Jackson Lake Lutheran Church or donor's choice.   Spencer-Owen Funeral Home is in charge of arrangements.  www.SpencerOwen.com
To order memorial trees or send flowers to the family in memory of John Thomas Mack, please visit our flower store.