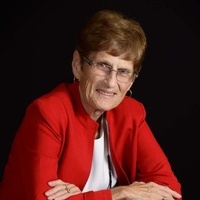 Joanne Janet (Black) Stauffer, 77, of Albert Lea, MN, formerly of Winnebago, MN passed away peacefully on Monday, June 4, 2018 in Yuma, AZ. Visitation time will be from 5:00pm?7:00pm Wednesday, June 13, 2018, at Spencer?Owen Funeral Home, 345 6th Ave SE in Winnebago, and one hour prior to the service at the church.  Funeral services will be held on Thursday, June 14, 2018, at 2:00 PM, at Lutheran Church of Our Savior in Winnebago.  Burial will be in Basey Cemetery.  Web tributes may be left at www.spencerowen.com Born March 17, 1941 in Willow Creek, MN she was the daughter of the late Wilbert and Cora (Stolzmann) Black. On December 10, 1960 she married her high school sweetheart, Al Stauffer. Joanne was very involved with her family farm, which they resided on for 27 years and raising their three sons. She took pride within her church community and teaching Sunday School. She loved life and making everyone around her laugh. She and Al moved to Albert Lea in 1987 where she worked at Mrs. Gerry’s Kitchen until her retirement. She is survived by her husband of 57 years, Al Stauffer; sister, Shirley Madigan; three sons, Brad (Heidi) Stauffer, Dan (Holly) Stauffer and Dave (Sherry) Stauffer; six grandchildren, Reed Stauffer, Talicia Koester (Kyle), Randi Garletz (Joey), Kinsey Stauffer (Matt), Chelsi Rhodes and Justin Stauffer; four great-grandchildren, Grace Garletz, Cole and Greyson Glimsdal, and Vada Garletz. Joanne was preceded in death by her parents Wilbert and Cora (Stolzmann) Black; brothers, Robert Black, Delbert Black; sisters, Vernell Harbitz and Lorraine Black.
To order memorial trees or send flowers to the family in memory of Joanne Janet Stauffer, please visit our flower store.