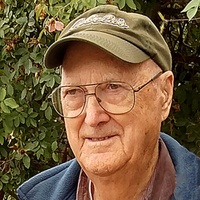 James D. Sharp, age 92, formerly of Amboy, died Wednesday, January 26th, at Mankato Lodge Senior Living. Funeral Service will be held on Saturday, February 5th at 2:00 p.m. at the United Methodist Church of Amboy, with visitation one hour prior to the service. Due to concerns for the health and safety of all in attendance, the family is requesting masks be worn. Online condolences and a live stream of the service will be available at www.spencerowen.com/obituary/james-sharp.

After High School graduation, James attended the University of Minnesota Agricultural School in 1949.  James began farming with his father in 1947. He farmed for over 50 years with a great love of sowing and harvesting. James loved to dance and spent most of his weekends dancing at the Kato ballroom. In 1951 he met the love of his life at a dance there. On Dec. 20, 1952, he was united in marriage to Dorothy Jean Reedstrom at the Belgrade Ave. Methodist Church in North Mankato, MN. They made their home on the farm in Sterling Township where they resided for 65 years, later moving to Primrose Retirement Community. Their marriage produced two children. He was very proud of his children and grandchildren and their talents.  The family spent many good times camping together. James and his father, and later his son and daughter and grandchildren, hunted and fished together. James was an avid outdoorsman. He enjoyed hunting, fishing, ice fishing with his snowmobile and waterskiing with family and friends.

James was preceded in death by his parents.

To order memorial trees or send flowers to the family in memory of James Sharp, please visit our flower store.