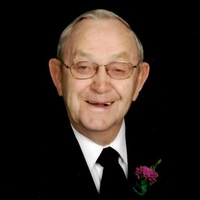 Bert Knight, age 92 of Amery, WI and formerly Delavan, MN passed away Monday January 25, 2021 at the Amery Hospital. A memorial service will be held 11am Friday January 29, 2021 at Spencer-Owen Funeral Home in Winnebago with Rev. Durene Cornell officiating. Burial with military honors will be at Riverside Cemetery in Winnebago. Live streaming can be viewed, and online condolences can be left at www.spencerowen.com

Herbert Alden Knight was born December 21, 1928 in LeRoy, MN to Leslie and Esther Knight. He grew up with a large family on a farm. In 1951, he married the love of his life Joyce Miller. Shortly after he was drafted into the Army where he proudly served in Germany for 2 years, he returned to the Delavan area where he and Joyce raised their family and farmed. Bert had various jobs aside from farming. He worked for the city of Delavan for almost 10 years as well as driving the van at St. Luke’s for almost 15 years he also did a lot of carpenter work. Bert had very strong faith and was always very active in his church. Bert was also involved in the American Legion in Delavan, 4-H, softball and all of the kid’s activities. He was very active in the bowling league, playing cards (hand & foot and cribbage) and pitching horseshoes. He had a huge passion for sports, especially baseball and loved the Minnesota Twins.

He is preceded in death by his parents, his wife Joyce and his brothers and sisters.

To order memorial trees or send flowers to the family in memory of Herbert Knight, please visit our flower store.