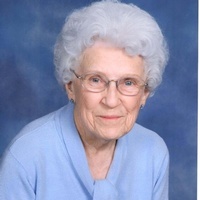 Hazel Anne Gilreath, 96, of Winnebago, peacefully passed into the presence of her Lord surrounded by family on January 2, 2018 at Heartland Parker Oaks. Visitation will be at the Spencer-Owen funeral home on Friday, January 12, 2018 from 5 to 7 PM and one hour prior at the church. Funeral service will be on Saturday, January 13, 2018 at 11 AM at the First United Methodist Church, 109 Cleveland Ave. W. Winnebago. Interment will follow in Rosehill Cemetery, Winnebago. Spencer-Owen funeral home is entrusted with arrangements. Www.SpencerOwen.com Hazel Gilreath was born to Anchor and Anna (Larsen) Hesseldahl on September 24, 1921 in Elmore, Minnesota. They later moved to Winnebago where Hazel attended rural country school. She graduated from Winnebago High School in 1939 then attended beauty school. She worked as a beautician in Winnebago for many years. On October 19, 1941 Hazel was united in marriage to Roy Jacobsen in Paris, Texas. To this union 4 children were born: Bradley, Janis, Brian and Ann. after Roy returned from his military service they resided in rural Winnebago. Hazel owned and operated Hazel's dress shop for several years. After Roy's death in 1977 Hazel married Donald Gilreath. They farmed for many years until Donald's death. At that time Hazel moved into Winnebago. She loved  the Lord and served  Him lovingly as an active, lifelong member of the Winnebago Methodist Church. For many years she taught Sunday school, release time classes, VBS and was active in the women's church circles and UMW. Hazel is survived by her four children, Bradley (Annie) Jacobsen of Rogue River, OR,  Jan (Bob) Kaduce, Brian (Carrie) Jacobsen and Ann (David) Krause all of Winnebago; 11 grandchildren; 25 great-grandchildren and several nieces and nephews. Hazel was preceded in death by her parents, husband Roy of 36 years, husband Donald, two brothers, one sister and four grandchildren.
To order memorial trees or send flowers to the family in memory of Hazel Anne Gilreath, please visit our flower store.