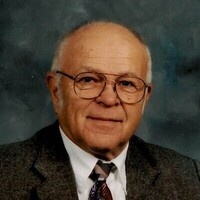 Harold Tonn, age 89 of Winnebago passed away peacefully at his home Sunday February 6, 2022. A memorial service will be held at 11AM Friday February 11th at St. Mary’s Catholic Church in Winnebago with Fr. Gregory Parrott officiating. Burial will take place at St. Mary's Catholic Cemetery at a later date.

Harold was born April 26, 1932, in Amboy to Walter and Lena (Bergeman) Tonn. He was one of five children. In 1952 he joined the Army and served his country for two years. After returning home, he met and married the love of his life, MaryAnn Noy. Together they raised a family of eight. Harold was a hard-working man and provided for his family running his own mechanics business out on the farm. When he wasn’t busy with that, he enjoyed woodworking out in his shop.

He is preceded in death by his parents and siblings, Clarence, Albert, Gary and Dorthea Wilson.

To order memorial trees or send flowers to the family in memory of Harold Tonn, please visit our flower store.