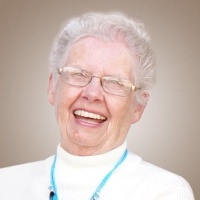 Evelyn Krause, age 89, of Winnebago, passed away on July 17, 2019 at Heartland-Parker Oaks in Winnebago. Visitation will be on Friday, July 26, 2019 from 4-7 PM at Spencer-Owen Funeral Home. Funeral Service will be on Saturday, July 27 at 11 AM at the First Baptist Church of Winnebago with Rev. Daren Barnett officiating. Additional visitation beginning at 9:30 AM.  Interment will follow in Riverside Cemetery, Winnebago. Spencer-Owen Funeral Home is entrusted with arrangements. www.SpencerOwen.com

Evelyn Iona (Canon) Krause, was born November 12, 1929 in Winnebago, to Lela E. (Loveall) and Leslie O. Canon.  She graduated from Truman High School in 1947, attended Mounds Midway School of Nursing, in St. Paul, receiving her RN degree. She married Raymond Dudley Krause, December 26th, 1953 and they resided in Winnebago, while she was employed as a nurse at the Winnebago Hospital.  She served devotedly by her husband’s side to support him in their business, and to this union came 3 sons, Steven, David, & Lyndon.  Evelyn’s home was her mission field and she used her space to raise their sons, dote on her grandchildren, read her Bible and pray daily, feed whomever appeared on her step and entertain with grace.

Evelyn was an avid Winnebago Area Community Pool supporter and was involved with founding and attending the Friday “Ladies Brunch” at the pool, which raised funds for pool support and improvement.  Even up to her last years, she could be seen swimming laps daily at noon, thanks to her loving friend, Milli Hanson, for her support and companionship.  Evelyn served for decades as the contact person and organizer to the blood drives conducted in Winnebago. She had an inspiring love for visual creativity and an eye for color.  She grew beautiful vegetable and flower gardens, doing both canning and flower arrangements as an expression of her many creative skills.  In addition to this, she became a proficient painter, creating oil masterpieces, as well as porcelain china, which she hand-painted delicately with colorful images, under the tutelage of Joan Frandle.

Evelyn was looking forward to her heavenly reunion with her Savior, and often spoke of it.  Her family is rejoicing with her, as the hymn so aptly declares, “When we ALL see Jesus, What a day of rejoicing that will be!”

Memorials may be directed to the Winnebago Area Swimming Pool or the Muir Library in Winnebago.

To order memorial trees or send flowers to the family in memory of Evelyn Iona Krause, please visit our flower store.