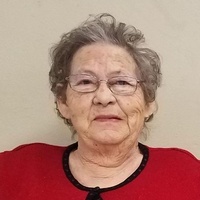 Erla Mae Schenk, age 81, of Winnebago, died Sunday, May 13, 2018, at Good Samaritan Center in Albert Lea. Visitation time will be from 5:00pm 7:00pm Thursday, May 17, 2018 at Spencer Owen Funeral Home 345 6th Ave SE in Winnebago, and one hour before the service at the church. Funeral services will be held on Friday, May 18, 2018, at 2:00 pm, at Lutheran Church of Our Savior in Winnebago, with Rev. William Sabol officiating.  Burial will follow at the Rosehill Cemetery, Winnebago.  Web tributes may be left at www.spencerowen.com Erla Mae was born November 6, 1936, in East Chain, MN, the daughter of Erich and Joy Alice (Richardson) Becker. On November 2, 1957 in Willow Creek she married Henry A. Schenk. Erla Mae worked at a turkey plant prior to her marriage to Henry.  After marriage, she moved to Woonsocket, RI where Henry was stationed in the Army.  After he was honorably discharged from the service, they moved back to the southern Minnesota/northern Iowa area where Henry worked for various famers and Erla Mae was a homemaker.  She also worked at Telex in Blue Earth for a few years.  In 1976, they moved to the family farm northwest of Winnebago where she resided until after Henry’s death when she moved into Winnebago.  In 2016, she moved to Albert Lea where she remained until her death.  One of her favorite things to do was drink coffee and visit her friends. Erla Mae is survived by her daughter Robin (Fred Rennpferd) Pettit of Freeborn, son Ron (Judy Kaderabek) Schenk of Winnebago, sister Darlain Anacker of Fairmont, three grandchildren, Casey (Courtney Holm) Schenk of Winnebago, Laura (Shaun) Mondahl of Waseca, Danielle Pettit of Fairmont and four great-grandchildren. Erla Mae was preceded in death by her husband Henry, sons Rick and Daniel Schenk, parents, sister Kathleen Wells, brother Darrell Becker, infant brother Everett Becker, brothers-in-law Walter Anacker, Herman Larson, sister-in-law Janet Becker.
To order memorial trees or send flowers to the family in memory of Erla Mae Schenk, please visit our flower store.