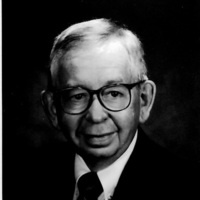 Dr. Roger W. Hanson, 85, passed away suddenly of organ failure at St. Mary’s Hospital in Rochester MN Saturday, August 4th, 2018. There will be a Celebration of Life Visitation from 4-8pm on Thursday, August 9th at Spencer Owen Funeral Home in Winnebago MN. There will be a family burial ceremony at Riverside Cemetery in Winnebago. Web tributes may be left at www.spencerowen.com Roger Warren Hanson was born at home on October 14, 1932, in Virginia, MN, to Edwin and Myrtle (Nystrom) Hanson. He attended the Virginia Public Schools from kindergarten through to his high school graduation in 1950. He was on the school swimming team and went to State with the relay team. He attended Virginia Junior College, the University of Minnesota and was a graduate of the Illinois School of Optometry in Chicago in 1956. He practiced in the Twin Cities before starting his practice in Winnebago in June of 1961. He met his wife, Millicent Kunard on a blind date in 1962 and they were married June 6, 1964, at Grace Lutheran Church in Fairmont. They have enjoyed 54 years of marriage. Roger enjoyed his profession and was honored with the 1998 Distinguished Service award given by the Minnesota Optometric Association. He was a longtime community volunteer serving for 32 years on the EDA board. He was President of the Muir Library Board and served on the Winnebago City Council, the Planning and Zoning commission, the Chamber of Commerce, the Lions, the Winnebago Foundation, and Riverside Golf Club Board. He also served on the First National Bank Board of directors, retiring as Board President. He was inducted into the Winnebago Hall of Fame in 1998. He would have retired from the United Hospital elected Board in December after serving two terms. He was a 50-plus year member of the Masonic lodge. He and his wife enjoyed traveling, outdoor activities, as well as their assorted furry family. He downhill skied in Colorado until his 84th year, and still had fun cross-country skiing. More golf was enjoyed following his retirement from practice. He treasured his friends and enjoyed the time spent solving the world’s problems over morning coffee and lunch. He was pleased to have his Norwegian roots find him in 1989, as there had been a name change when his Grandfather Hovin arrived from Norway. They had many visits with friends and family in the Scandinavian countries, highlighted with a wonderful visit during a syttende mai (Norwegian Constitution Day) celebration in Trondhiem. He is survived by his wife, Millicent, nephew John Tollefsrud, and great nephew Adam Tollefsrud. He is also survived by the Kunard, Behrens and Roalson nephews and nieces, his sister-in-law Marlene Kunard, and the Hovin and Hovind families in Norway. He was preceded in death by his parents Edwin and Myrtle, sister, Merlyn Hanson Tollefsrud, (Dr. Tollie), nephew Richard Roger Tollefsrud, grand nephew, Neal John Tollefsrud, in-laws Richard and Ida (Reim) Kunard, sister- and brother-in-law Marytemple (Kunard) and Eldred Behrens, sister-in-law Merelene (Kunard) Hertzler, nephew Scott Roalson, and brother-in-law Marlin Kunard. Han vil bil dypt savnet.  “He will be deeply missed.”
To order memorial trees or send flowers to the family in memory of Dr. Roger Warren Hanson, please visit our flower store.