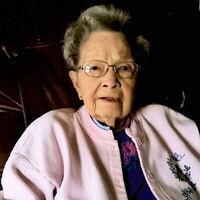 Dorothy Hoppe, age 99 of Winnebago passed away Monday October 3, 2022 with her loving family surrounding her. A funeral service will be 11AM Friday October 7th at Spencer-Owen Funeral Home in Winnebagowith Rev. Daren Barnett officiating. Visitation will be 5-7PM Thursday at Spencer-Owen Funeral Home and continue one hour before the service. Burial will be at Amsterdan Township Cemetery in Kanawha, IA.

Dorothy Estelle (Riekens) Hoppe was born on April 19, 1923 to George and Anna (Albright) Riekens in Boone Township, Wright County, Ia. She graduated from Kanawha High School in 1941 and was united in marriage to Arthur Hoppe of LuVerne, Ia on February 24, 1942 in Fairmont, Mn. They farmed in the Delavan area for several years before moving to Winnebago in 1948. In addition to driving truck for their family business, Dorothy worked for Stokley’s and United Foods in Winnebago and Fairmont until her retirement in 1986. She enjoyed watching the birds, gardening and tending to her many flowers as well as dancing to old-time music but most of all she enjoyed her many generations of grandchildren.

To order memorial trees or send flowers to the family in memory of Dorothy Estelle Hoppe, please visit our flower store.