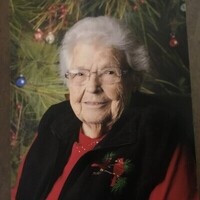 Mrs. Dorothy Avis Allston Blair aged 96 was born on April 17, 1924, at St. Joseph’s Hospital in Brainerd, Minnesota to William Daniel and Edith Pearl ( Turner ) Allston.  She grew up on a dairy farm called “DorDon Acres” (named after her and her younger brother) near Highway 18, just east of Brainerd. Dorothy attended Harrison School in Brainerd for grades 1-6 and Washington High School for grades 7-12.  She sang in the school and church choir and took lessons for the piano and organ.  Her favorite classes were Algebra, Bookkeeping, Typing, Shorthand and English Grammar.  By the time she graduated from high school with honors in 1942, she could type 160 words a minute.  During the summer months she would help on the farm by milking cows and driving the tractor to cut corn.

In the fall of 1942 Dorothy moved to Washington D.C. to work as a secretary in the War Department and the Pentagon.  She attended New York Avenue Presbyterian Church in D.C., the church that President Lincoln attended when he was president.  Dorothy was a member of a special choral group that sang in Constitution Hall for Eleanor Roosevelt.  She returned to Brainerd in 1945 after World War II ended and started working for a group called Christian Endeavor that supplied lessons and materials for youth groups in the state of Minnesota. Dorothy then felt called to attend college at Bethel in St. Paul.

During the summer of 1948 at Bible Camp, she met Burton Blair, a farmer from Winnebago, MN.  They married on November 26th, 1949.  Burton and Dorothy moved to Dubuque, IA after they were married so Burton could pursue a degree in Seminary Studies and become a pastor.  They served churches in Illinois, Nebraska, South Dakota, and Minnesota.  Dorothy was Burton’s secretary and created the weekly bulletins for church.  While working at the Presbyterian Church in Beaver Creek, MN, Dorothy published a weekly, mimeographed newspaper called the Beaver Creek Banner for about five years.

The Blair’s loved to travel and organized three tours to Israel, Jordan, Cairo, Rome and Greece. They took their camper to 44 states and also toured Alaska, Hawaii and Mexico City.  In retirement, Burton and Dorothy spent most winters in Mission, TX.

Dorothy and Burton retired from serving churches in 1986 and lived on a small acreage near Valley Springs, SD for 17 years. They later lived in Luverne, MN and Brandon, SD before moving to New Richmond, WI in 2012.  Burton passed away in November of 2012.  Dorothy entered the Deerfield Senior Care Facility four months later.  She passed on to heaven and her husband a little after midnight on June 15th, 2020. Dorothy was preceded in death by her baby brother Robert, her son in law C. Scott Feltman and her beloved husband, Burton.

A Sunday worship service and funeral will be held in her honor at the Bass Lake Community Church, 23230 400th Ave near Winnebago, Minnesota on Sunday, June 21st at 11 AM. Bring a camp chair(s)  to join friends and families on the lawn of this historic country church that our Blair ancestors built.  Following the service and burial, a picnic style box lunch will be provided. Picnic under the trees following church on chairs, blankets and quilts as our ancestors did. RSVP to 605-681-4713 (voice or text).

In lieu of flowers, memorials can be sent to the Christian Worship Hour, Aberdeen, SD https://www.christianworshiphour.com/

To order memorial trees or send flowers to the family in memory of Dorothy Avis Blair, please visit our flower store.