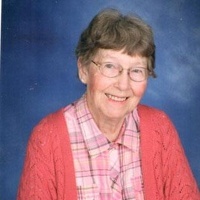 Deloris Anna Butterfield, nee Abbas, age 88, of Winnebago, formerly of Hackensack, MN, passed away on Tuesday, March 5, 2019 at the United Hospital in Blue Earth.  Memorial services will be on Friday, June 7, 2019 at 2 pm at Faith Lutheran Church in Delavan with Rev. Duane Brown and Todd Substad officiating.  Visitation will be held one hour prior to services at the church on Friday.  Burial will be in the Lura Cemetery in rural Delavan. Online condolences can be left at www.spencerowen.com

Deloris was born on April 25, 1930 in Bancroft, Iowa to Teus and Ella (Post) Abbas.  Her family lived in Iowa for several years before moving to Delavan in 1944.  She attended country school in both Iowa and Minnesota.  She married Robert Butterfield on January 22, 1950 in Delavan.  They farmed in the Delavan area until 1990 when they retired and purchased a lake home between Hackensack and Longville, Minnesota.  They enjoyed their lake home and loved having family and friends visit.  They moved back to the Winnebago area in January 2010 to be nearer family when Robert became ill.  They celebrated 60 years of marriage together before Robert passed away.  Deloris continued to return to their lake home each summer to visit friends, participate in church activities, and sing with her church choir.

Deloris enjoyed traveling with Robert, especially if it included a visit with family members.  They enjoyed two trips to Hawaii besides traveling to many of the contiguous United States.  They spent several winters with their youngest daughter and her husband in Arizona and would often explore the state or visit relatives living nearby.  Deloris loved to bake and share her efforts with her family, grandchildren and friends.  Deloris was a homemaker and learned several crafts while growing up.  She always kept a large garden and loved planting gladiolas.  She was gifted in sewing, quilting, crocheting, and other crafts and her hands were never idle.  Deloris was a member of the Longville Community Church in Longville, MN.  She served as President of the Women’s group for several years and was very active in their ministry.  Deloris enjoyed singing and was a member of her church choir and participated in the community choir as well.  She also liked to write poetry.

To order memorial trees or send flowers to the family in memory of Deloris Anna Butterfield, please visit our flower store.