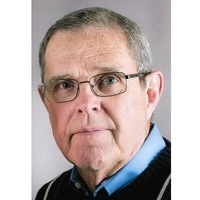 David Francis Lewis, 77, died on Saturday, June 6, 2020. The fourth of 13 children born to Frank and Catherine (Thorman) Lewis on June 20, 1942, Dave grew up in Adrian, MN. After graduating from Adrian High School, he served on the USS Vega in the U.S. Navy from 1960-1963. When he returned home to Minnesota, he was introduced to Mary Susan (Penning) at the Ritz Ballroom in Lismore. They stayed in touch while he worked in Nebraska and were married at St. Anthony Catholic Church in Lismore on November 21, 1964.

Dave attended barber school in St. Paul, working in White Bear Lake and Rosemount while he and Mary began raising their four young children. In 1972, they moved to Amboy where Dave opened his own shop on Main Street. He managed his business for over 48 years without making a single appointment or even having a telephone in the store. Dave cut three generations of hair and entertained thousands with his life wisdom, sports talk, and quick-witted responses. If he wasn’t at the barber shop, Dave could be found helping his kids with DIY projects, watching a ball game, or hitting grounders to his grandkids. The barber also did his best to serve others in the community as Amboy’s mayor and longtime member of the Maple River School Board and St. Matthew Church Council. Coach to all, friend to everyone, Dave precluded every goodbye with “It’s been a joy.” His family can’t agree more.

To order memorial trees or send flowers to the family in memory of David Francis Lewis, please visit our flower store.