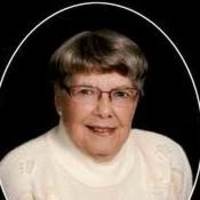 Betty Engelby, age 91, passed away Monday March 16, 2020, at Parker Oaks in Winnebago, MN. A private family service will be held September 25, 2020 with Rev. Daniel Foster officiating at Rosehill Cemetery in Winnebago. Friends are encouraged to leave online condolences at www.spencerowen.com or send cards to Spencer-Owen Funeral Home, 345 6th Ave SE, Winnebago, MN 56098. The service can be viewed by the public at 1:00pm at www.spencerowen.com and can also be viewed following the service. In lieu of flowers, memorials preferred to Parker Oaks Assisted Living, UHD Hospice or the City of Winnebago.

Betty, daughter of Jess and Geneva Martin, was born in Algona, IA, December 7, 1928, oldest of six girls. She grew up in Livermore, IA and graduated as valedictorian from Livermore High School in 1946. Following school, Betty’s uncle A. Ole Fox persuaded her to come with him to work at Stokely-Van Camp in Winnebago during corn pack. When Ole returned to college in the fall, Betty stayed to marry Ole’s good friend, James Yeager from Delavan, in 1947. James died in a boating accident in 1948, sadly leaving Betty and two children. Betty married Henry Engelby in 1949, living in Winnebago. Together they had one son.

Betty had a feisty character along with a laugh that filled the room. When prompted, she was never without a clever comeback with a twinkle in her baby blues to keep everyone on their toes. She gave her opinion without flinching or apology, yet insightful. She always worried if we had eaten or had enough to eat, sending us off with a care package as we walked out the door.  She was a planner and organizer, never without a To-Do-List. She was a hard worker, a standard she impressed upon us growing up. She took night classes at Mankato State University for accounting while continuing to work and raise a family. Throughout her working career, she was a bookkeeper for the John Musser Food Processing Co. and the Johnson Chevrolet and Implement, receptionist for optometrists Dr. Nelson and Dr. Roger Hanson, and a clerk at the at U.S. Post Offices in Winnebago, Blue Earth and Mapleton for 25 years. She was a community leader, serving 20 years on the Winnebago City Council. She was inducted into the Winnebago Hall of Fame in 1997.  She volunteered many years for the IRS/ Minnesota Tax Services program doing tax preparation and at the Presbyterian Church Next to New thrift shop where she was a member. She was an avid bowler on the Lucky Strike Super Valu team and inducted into the USBC Bowling Hall of Fame in 2018. She was a member of Garden Club, the American Legion and VFW Auxiliaries. She loved gardening, antiquing, shopping, refinishing furniture, ceramics, and spending time with her family. She had an adventurous spirit that took her to China, England, Egypt, France, Italy, Spain, and many other countries abroad. She truly enjoyed her friends, having many lively conversations and laughs over a beer with 2 olives.

The family would like to express their gratitude to the staff at Parker Oaks and UHD Hospice for their attentiveness and caring companionship.

To order memorial trees or send flowers to the family in memory of Betty J Engelby, please visit our flower store.