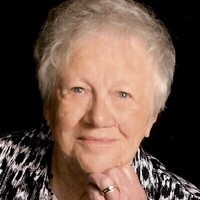 Barb Schaible, age 85 of Delavan passed away Thursday April 7, 2022, at Heartland Senior Living-Parker Oaks in Winnebago with her loving family by her side. Funeral services will be 11AM Tuesday April 12, 2022, at the Lutheran Church of Our Savior in Winnebago with Rev. Robert Bailey officiating. Visitation will be Monday April 11 from 5-7PM at Spencer-Owen Funeral Home and continue one hour before the service. Burial will be at Rosehill Cemetery in Winnebago.

Barbara Lou was born September 14, 1936, to Ralph and Amy (Stewart) Miller in Blue Earth, MN where she graduated high school. Shortly after graduating she married Ronald “Red” Johnson, together they had four children. Red passed October 9, 1998. Barb was on a bowling league for over 50 years. She bowled every Wednesday night for First National Bank and then First Financial Bank. On one of those nights, she met Chuck Schaible, they soon fell in love and merged their family of seven children, marrying September 23, 2006. Together they lived out on the Schaible family farm until this past October when Barb moved into Parker Oaks.

Barb was employed at Electro-Craft for many years and then went on to be a dept. manager at Wal-Mart until she retired. She was also a part of LWML church women, was a member of the Elmore Saddle Club for over 25 years, enjoyed barrel racing and riding the trails. In the last few years, she was a part of a three-generation bowling team, bowling with her daughter and granddaughter. She always attended the grandchildren’s activities and cheered them on at everything they did. Her and Chuck enjoyed traveling, golf, their Sunday night pizza outings and an occasional stop at the casino. She was a gentle and loving wife, mother and grandmother who was always there when needed.

To order memorial trees or send flowers to the family in memory of Barb Schaible, please visit our flower store.