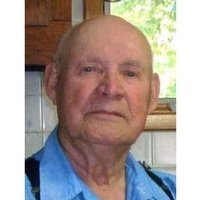 Albert James Jordan, age 97, of Winnebago, died Sunday, September 24, 2017, at Truman Sr. Living. Memorial services will be held 11:00 AM on Friday, October 6, 2017, at Spencer Owen Funeral Home 345 6th Ave SE in Winnebago, with Rev. Daren Barnett  officiating. Visitation time will be one hour before the service, at the funeral home.  Web tributes may be left at www.spencerowen.com He was born (July 12, 1920) in Winnebago to Frank and Loretta (Wilson) Jordan.   He served in the United States Army 81st Depot Repair Squadron- Australia and New Guinea as a plane repair mechanic. During his service from June 2, 1942 – November 12, 1945 he was given a Good Conduct Medal, Asiatic-Pacific Theater Service Medal, a Philippine Liberation Ribbon and 6 Overseas Bars.  Upon returning to the United States he married Nimfa Goraczkowski August 20, 1949.  From their union 4 children were born James, Katherine, Harold and an infant son. Along with being a self-employed heavy equipment operator, Albert was a policeman for Winnebago and Amboy for 22 1/2 years until his retirement in 1982. He lived, worked and retired in Winnebago, Minnesota. Albert was a private man that loved his family and provided for them.  He enjoyed all animals, fishing, and his neighbors.  A self-taught man he was very knowledgeable on many subjects. Survivors include his three children:  James (and Janine) from Madison Lake, Katherine (and George) from Woodbury, and Harold from Lakeville, 5 grandchildren:  Trent (and Ginny) Jordan, Kelly (and Bob) Schweim Craig (and Nichole) Erhard, Matt (and Holly) Jordan and Carey (and Sean) Gephart, 5 great grandchildren: Brandon and Kayla Jordan, Ivan and Ellie Schweim, and Jack Gephart, one sister: Anna May Jordan of Medford, Oregon Blessed be the memories of Albert Jordan and those who passed before him: his wife Nimfa, his infant son, Edward Jordan (brother), Marie Hartman (sister), Marvin Jordan (brother), Percy Jordan (brother), Elwin Jordan (brother), his parents, and daughter-in-law Danette Jordan.
To order memorial trees or send flowers to the family in memory of Albert James Jordan, please visit our flower store.