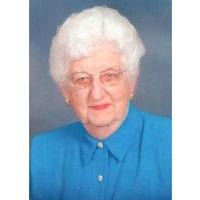 Anita E.(Dewitz) Bonnett, age 98 years 2 months 5 days died June 14, 2017 at Mapleton Community Home with family at her side. Funeral services will be at St. Paul’s Lutheran Church, Amboy with Rev. Rudolph H. Maurer Jr. presiding on Monday June 19th, 11 AM with visitation one hour prior to service. Web tributes may be directed to www.SpencerOwen.com Anita was born April 9, 1919 in Amboy to William and Matilda (Urban) DeWitz on their family farm. She was baptized on April 17, 1919, confirmed on July 10, 1932 at St. Paul’s Lutheran Church. She graduated from Amboy High School in 1937. Anita was employed at various businesses in Amboy from grocery stores to Norman’s Café. She married Charles Bonnett on April 4, 1943 and they farmed until Charles illness forced them to retire. They spent many winters in Arizona with family and friends. After Charles death she moved off the farm and lived in Amboy until September 2015 when she moved to the Mapleton Community Home. Anita loved her family, church and friends. She also enjoyed gardening, baking cookies (most of which she gave away), dancing, playing cards and an occasional trip to the casino. She is survived by daughter Suzanne (Robert) Zech, one granddaughter Charlotte (Richard) Tate, great grandchildren Abigail and Gabriel Tate, sister in law Harriet Bonnett, many nieces, nephews and friends. Preceded in death by her husband Charles in 1991, parents William and Matilda DeWitz, brothers Otto and Walter, sisters Louise (Dewitz) Pahl and Meta (Dewitz) Lang Wicks. Memorials to donors choice or St. Paul’s Lutheran Church or Lutheran Hour Ministries.
To order memorial trees or send flowers to the family in memory of Anita E. Bonnett, please visit our flower store.