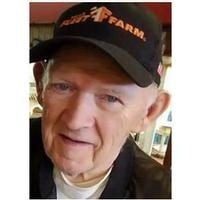 Richard Lee Brannick, age 82, of Winnebago, passed away Wednesday, May 24, 2017, at United Hospital District in Blue Earth. He was born October 17, 1934, in Morgan Township, Franklin County, IA the son of Bert and Gladys (Hackbarth) Brannick. He served in the United States Air Force 1954-1957. He was a devoted husband and father all the days of his life. He met the love of his life Margie Pearl Miller and married her on October 17, 1958 at the Little Brown Church in Nashua, IA. They were happily married for 58+ years and spent all their time together remaining in their home in Winnebago until he soared into Heaven to be with God. Now he will continue to watch over his family that he devoted his life to from above. Family and Sports were the basis on which he did everything. As children growing up there were countless times that he loaded us all in the car and off to the Met Stadium or Metrodome to watch the MN Twins play ball as baseball was such an important part of his life and something he could enjoy with his family. He was active in coaching his sons in Football growing up, playing golf and attending all of his children’s sporting events. Whether it was basketball (PIG, HORSE, Around the World) or just shooting hoops he was actively in our lives. We were an outside family whether it was Snowmobiling, Fishing, Golf, Croquet, Basketball, Football, Street Hockey he was always out there playing with us. One year he even tore out all the grass in the backyard and put in a full ice skating/hockey ice rink for everyone in the neighborhood to enjoy. Board games and Card games were always a staple at every family function. Each Christmas there would be a new game under the Christmas Tree from Santa and we all played together as a family. The board and card games continue right up until the very end of his life and this will continue in the future generations of his children & grandchildren; he will just guide us from above. Everyone that met him was touched by his kindness, smile or sometimes simple wave or shake of his fist. His memory will live on in his loving, devoted wife, children, grandchildren and great grandchildren. He is survived by his wife, Margie Brannick of Winnebago, MN, son, Tim (Kristi) Brannick of Zimmerman, MN son, Daniel Brannick of Coon Rapids, MN son, Paul (Jean) Brannick of Brooklyn Park, MN, daughter, Karla (Jon) Holmes of Wyoming, MN, son, Jeff Brannick of North Branch, MN, sister, Emma Darlene "Pug" (George) Anderson of Dows, IA, 10 Grandchildren- Gary, Angela, Robert, John, Richard, Cassie, Rochelle, Samantha, Crystal, Adam and 1 Great Grandson- Bryan. He was preceded in death by his parents, Bert and Gladys Brannick, sister, Lois McCoy, brothers, Keith, Marv, Bob, Bill, Larry Brannick and daughter-in-law, Diane Brannick. Funeral Services will be held on Tuesday, May 30, 2017, at 11:00am, at Lutheran Church of Our Savior in Winnebago, MN, with Rev. William Sabol officiating. Visitation time will be one hour before the service at the church. Burial will be Wednesday, May 31, 2017, at 12:00pm in Fairview Cemetery, Dows, IA. Web tributes may be left at www.spencerowen.com Memorials preferred to Dementia or Diabetes foundations.
To order memorial trees or send flowers to the family in memory of Richard Lee Brannick, please visit our flower store.