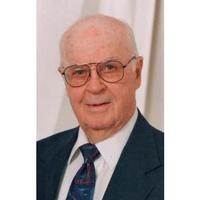 Eldon Franklin Jones, age 99, of Winnebago, passed away Tuesday, May 16, 2017, at Parker Oaks in Winnebago. Funeral services will be held on Saturday, May 20, 2017, at 2:00 PM, at the First Baptist Church in Winnebago, with Rev. Daren Barnett officiating. Burial will be in Bass Lake Cemetery. Visitation time will be one hour prior to the service at the church. Web tributes may be left at www.spencerowen.com Eldon Franklin Jones was born February 24, 1918, at the Jones Family Homestead in Delavan Township, Winnebago, MN, to Harry and Meta (Crays) Jones. He attended country school rural Winnebago and then the University of Minnesota Farm School in Saint Paul. On May 27, 1943 he married his sweetheart Opal Tjaden, and they lived on the original Jones Family Homestead their entire married life. They were blessed with three sons, Douglas, Steven, and Tom. Eldon had a beautiful voice!!! He loved to sing and was very active in the barbershop choirs and quartets throughout southern Minnesota as well as the singing group (The Brothers) in his church. He willingly shared his gift at countless events his entire life. He also had a passion for flying in his younger years and piloted his own planes. His next greatest love after his family was farming—he was still actively planting and harvesting at 98! He is survived by his wife, Opal Jones; children, Douglas Jones, Steven (Nancy) Jones all of Winnebago, Tom (Linda) Jones of Delavan; grandchildren, Sheila Van Riesen (Matt) of Park Rapids, Sharon (Josh) Walker of Winnebago, Erin Jones of Otsego, Keith (Erin Lynn) Jones of Hudson, WI, and Clint (Jamie) Jones of Winnebago; great grandchildren, Logan and Aliesha Van Riesen, Bethany, Liberty and Brytain Walker, Evan, Wyatt, Dylan, Will, Avery and Preston Jones; brother-in-law, Bill Tyler of Sioux Falls, SD, along with many nieces, nephews and extended family. Eldon was preceded in death by his parents; grandson, David Paul Jones; sister, Marion Jones Bottomley; brother, Edmund Jones; sisters-in-law, Gladys Lindberg, Mildred Jones, Donna Tjaden, and Ruth Tyler; brothers-in-law, Dennis Lindberg and Maurice Bottomley.
To order memorial trees or send flowers to the family in memory of Eldon Franklin Jones, please visit our flower store.