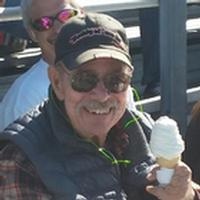 Roger C. Anderson, “Two-Fingers”, 78, passed away at his home in Delavan, MN on Monday, May 8, 2017. Roger was born in Barber Township, Faribault County on October 9, 1938, the son of Lorenzo “Mike” Anderson and Regina “Jean” Maday Anderson. He was a graduate of Delavan High School in 1956 and a member of the US Air Force from 1956 to 1960. Roger drove truck for many years, including a Coors Beer Route that took him from Colorado to Los Angeles where he met his wife, Trudy Cavender. He brought her back to Minnesota and small-town living where they raised their three children. In later years he built a shop and served as chief mechanic for many of the local owner-operators. He had a reputation for being able to fix almost anything. He liked people to think he was pretty gruff. His grandchildren dispelled that myth in short order. Roger and Trudy enjoyed time away from Delavan camping with family and friends. It was a wonderful change in lifestyle for them. Roger will be missed by his wife, Trudy; daughter, Deborah Zierke (Patrick), Madison Lake, MN; sons, Michael (Marilyn) Anderson, Blue Earth, MN and Ward (Renea) Anderson, Delavan, MN; eight grandchildren and four great grandchildren; brother, Richard (Karen) Anderson of Blaine, MN and sister, Alice (Rick) Golla of Rochester, MN. His parents; Brothers Joseph and Stanley; and infant sister Margaret preceded him in death.
To order memorial trees or send flowers to the family in memory of Roger Charles Anderson, please visit our flower store.