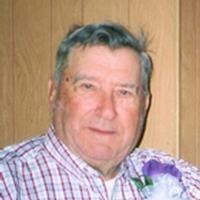 Delphin Harold “Jiggs” Boeck, age 87 of Amboy, Minnesota, passed away at Mayo Clinic Health Systems Mankato, MN on Wednesday, March 8, 2017. Funeral services will be held at 10:30AM on Monday, March 13, 2017 at St. Paul Lutheran Church in Amboy, MN with visitation beginning at 9AM. Interment with military honors will take place immediately following the service at St. Paul Lutheran Cemetery. Online condolences may be left at www.spencerowen.com. Delphin was born on November 5, 1929, on the family farm to Erwin and Ella (Ulrich) Boeck. He attended country school and graduated from Amboy High School in 1947. On August 31, 1950, Delphin entered the U.S. Airforce and served in bases across the United States going to Texas, New Mexico, Arizona, Hawaii and Colorado before serving as S/Sgt. as a part of the 509th Bomb Wing during the Korean War where he was a left gunner and a top gunner. After serving in the military until October 10, 1953, Delphin returned home to his family farm. He married Arline Gersch on June 3, 1962 in Lewisville, MN. They proudly farmed together while raising their 3 sons. They enjoyed going to auctions together for many years and going out to eat. Delphin also loved attending Farmfest. He and Arline enjoyed 37 years living together on the farm before moving to town in 1999. In August 2016, he left town to reside at the Mapleton Community Home. Delphin is survived by his loving wife of 54 years, Arline of Mapleton, MN; children, Richard Boeck of Good Thunder, MN, Thomas (Julie) Boeck of Amboy, MN, Robert Boeck of Amboy, MN; grandchildren, Brandon (Samantha) Boeck of Mankato, MN, Courtney Boeck of Mankato, MN, Dylan, Deborah and Ella Boeck of Amboy, MN; and great-grandchild, Isaac Fletcher of Mankato, MN; sisters, Gladys of Belmond, Iowa and Lucille of Mapleton, MN; and brother, Ronald of Winnebago, MN. Delphin is preceded in death by his parents, one brother and one sister.
To order memorial trees or send flowers to the family in memory of Delphin Boeck, please visit our flower store.