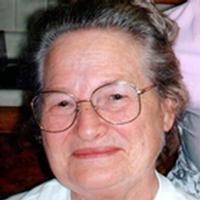 Nimfa E. Jordan, age 87, of Winnebago, passed away Wednesday, November 2, 2016 at Truman Senior Living in Truman, MN. Funeral Services will be held at 10AM Monday, November 7, 2016 at Spencer-Owen Funeral Home in Winnebago, MN, with Rev. Darren Barnett presiding. Online condolences may be left at www.spencerowen.com. She was born on a farm near Guckeen (Pleasant Prairie township) on March 21, 1929 to John and Francis (Tazarek) Goraczkowsi. She married Albert Jordan in Winnebago on August 20, 1949 and was a loving wife, loving mother and excellent homemaker for 67 years. From their union 4 children were born –James, Katherine, Harold and an infant son. She cherished her family and friends. She liked to garden, can vegetables, decorate cakes, fish, dance, do puzzles and most of all listen to and help other people. Survivors include: Her three children: James (and Janine) from Madison Lake, Katherine (and George)Erhard from Woodbury, Harold from Lakeville, and her husband Albert. 5 grandchildren: (Trent (and Ginny) Jordan, Kelly (and Bob) Schweim, Craig (and Nichole) Erhard, Matt (and Holly) Jordan and Carey (and Sean) Gephart. 5 great grandchildren: Brandon and Kayla Jordan, Ivan and Ellie Schweim, and Jack Gephart. One brother: Amel Goraczkowski of Amboy. Four sisters: Valeria Stauffer of Winnebago, Alvina Maine of Mapleton, Pauline (and Bill) Esteps of Phoenix, and Alice(and Richard) Swiontek of Detroit Lakes. Sister-in-law: Janice Goraczkowski Blessed be the memories of Nimfa Jordan and those who passed before her: Alvin Goraczkowski (brother), Rufine Goraczkowski (brother), her parents, daughter-in-law Denette Jordan, and her infant son.
To order memorial trees or send flowers to the family in memory of Nimfa Elizabeth Jordan, please visit our flower store.