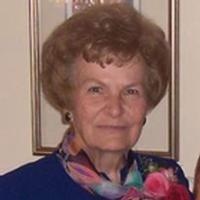 DuAnn Leone Boesch Scherer, age 84 of Amboy, Minnesota passed away on September 4, 2016, at Pathstone Living, Mankato after a ten year courageous cancer battle. Services will be held on Saturday, September 17, 2016, at 11:00 am, First Presbyterian Church of Amboy with Pastor Elaine Boyd officiating. Burial will be at Pleasant View Cemetery, rural Amboy. Visitation will be held on Thursday evening, September 15, 2016, from 5:00-8:00 pm, Spencer-Owen Funeral Home, Winnebago, Minnesota and one hour prior to services at the church on Saturday. DuAnn was born on July 3, 1932, in Mankato, MN to Frederick William Boesch and Leona Elsa Detjen Boesch. DuAnn lived her entire life in the Amboy area. On March 30, 1947 she was baptized and admitted into membership of the Amboy Presbyterian Church. Rev E.O. Dirks officiated. She graduated from Amboy High School in 1950 and attended Mankato State College studying business. She was employed by Nelson Implement of Amboy as their secretary after college. On August 21, 1954, she was united in marriage to James Lawrence Scherer at the Amboy Presbyterian Church with Rev. Dale Cunningham officiating. Three sons were born to this union: Bron James, Perry Wayne and Darin Lee. They were privileged to celebrate their 50th anniversary in 2004, and after a celebration with family and friends they traveled to Las Vegas with their three sons and their families. They rarely went very far from home, but did enjoy trips to Alaska, New York and Arizona. DuAnn was a member of the Presbyterian Church all her life and had been in charge of the Cradle Roll for many years. This position developed into a mission for her, as she continued to remember each child every year on their birthdays until they graduated from high school. Not only did she remember these children, but also friends, neighbors and family on all their special days. She religiously maintained a comprehensive, detailed calendar of all such dates. These remembrances always included a special gift as well. The children especially looked forward to the animated greeting cards she would carefully select for them each year. She loved her family and took a great interest in everything they were doing. When her boys were growing up, she followed their school activities and paid close attention to what they were being taught in school. Her grandchildren were her pride and joy and again, took a keen and detailed interest in each of their lives. DuAnn along with her husband, James, had an avid interest in politics, and she was not afraid to express her opinion about candidates as well as the key political issues of the day. She loved the United States of America and believed deeply that everyone know the true background, beliefs and records of both elected government officials and candidates for public office at all levels. DuAnn and James were elected delegates to the Republican Party of Minnesota State Convention several times over the years. In 1975, she had the privilege of meeting (then Governor, and future President) Ronald Reagan at an event in Mankato and had her picture taken with him which she proudly displayed in her home over these many years. She subscribed to many publications and was well informed regarding both U.S. and world affairs. After James passed away she continued to live on the farm west of Amboy. She loved her home and always saw to it that the farm site was well maintained. DuAnn is survived by her three sons: Bron (Geniene) of Northfield, MN, Perry (Mahtab) of New York, and Darin of Rochester, MN, ten grandchildren, two nieces and three nephews and her brother, Billy Boesch (sister-in-law Verla) of Amboy. She was preceded in death by her husband James in 2010, her brother Duayne in 1998 and her mother and father.
To order memorial trees or send flowers to the family in memory of DuAnn Leone (Boesch) Scherer, please visit our flower store.