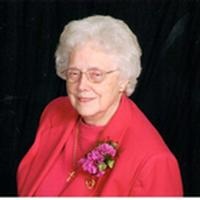 Funeral services for Joyce Knight, 85, Winnebago, MN will be held on Tuesday, August 9, 2016 at 10:00 am at the First United Methodist Church, Winnebago.  Inurnment will be held at a later date at Riverside Cemetery, Winnebago.  Joyce died on Friday, August 5, 2016 at Mayo Health Systems-Mankato.  Visitation will be held on Monday, August 8, 2016 from 5:00pm-7:00pm at Spencer-Owen Funeral Home, Winnebago and one hour before the services in the church. Joyce Arlene Miller was born on May 16, 1931 in Delavan Township, Faribault County, MN to Willie and Clara (Langworthy) Miller.  She grew up on the family farm just north of Delavan and graduated from Delavan High School in 1950.  On February 17, 1951 Joyce was united in marriage to Herbert “Bert” Alden Knight of LeRoy, MN.  They lived and farmed in the LeRoy, Mapleton, Delavan area until 1985.  They moved into Delavan and she worked at St. Luke’s Care Center for 24 ½ years as a caregiver and retired in 2001.  In 2004 they moved to Garden Court apartments in Winnebago.  Joyce was a wife, mother, health care giver, active member of the Delavan United Methodist Church, UMW, 4-H leader, PTO, Band Parents and was a charter member of DHS Inc.  She never missed Ken’s games or Kayla’s music activities or voice lessons.  Yes, she even got to some of the grandchildren’s games, dance and voice lessons and loved every minute of it. Joyce is survived by her husband Bert; son, Kenneth (Bonnie) Knight of Turtle Lake, WI; daughter, Kayla Hergott of Las Vegas, NV; grandchildren, Nicholas, Jenna and Kristina; step grandchildren, Robert, Todd, and Stacey; three great grandchildren, Owen, Aubrey, Brady; step great grandchildren, Morgan, Parker, and Lexi; brother, George (Marilyn) Miller of Wells; sisters, Beverly Heyes of Buffalo Center, IA and Marilyn (Ronald) Stensland of Blue Earth and;  and many nieces and nephews.  She was preceded in death by her parents; son-in-law, Gary Hergott; sister, Elizabeth Cramer; and brothers-in-law, Marvin Heyes and Lincoln Cramer. www.spencerowen.com
To order memorial trees or send flowers to the family in memory of Joyce Knight, please visit our flower store.