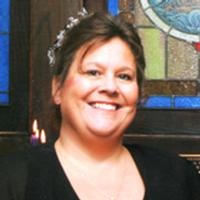 Janelle L. Hawkridge, 55, of Winnebago, passed away Saturday, March 19, 2016 at the Mankato Hospital. Funeral service will be 11 AM, Thursday, March 24, 2016 at the United Methodist Church of Winnebago. Visitation will be 5-7 PM, Wednesday, March 23 at the Spencer Owen Funeral Home, and one hour prior to service at the church. Burial will be in the Riverside Cemetery of Winnebago. Janelle was born November 24, 1960 to Lester and Bonita (Rundquist) Annen in Beloit, Wisconsin. She graduated from Winnebago High School in 1978, and later earned her bachelor degree in English from Mankato State University. Throughout the 1980’s and 1990’s she had two daughters, Lynne and Leigh and was a teacher around the area. Then she went on to marry the love of her life, Doug Hawkridge, in 2005. Janelle was an award winning scrap booker, accomplished writer and poet. She acted and directed many plays put on by DHS Inc. Her poetry has inspired art, roadside poems, and recently one was selected to be set to chamber instrumental and choral music by a Rochester composer. Her family and grandchildren brought her tremendous joy and happiness. She will be remembered as a lady of letters. She is survived by her parents, Lester (Bonita) Annen; husband, Doug Hawkridge; children, Lynne (James) Duben, Leigh (Andy) Larsen, Chelsea (Brendan) Habberstad, Jim (Tiffany) Hawkridge; grandchildren, Wyatt, Wesley, Rylyn, Rhys, Walker, Abigail and June; siblings, Joel (Dalene) Annen, Jacki (Lyndon) Johnson and Jill Annen, with many nieces, nephews and cousins. Janelle was preceded in death by her grandparents.
To order memorial trees or send flowers to the family in memory of Janelle L. Hawkridge, please visit our flower store.