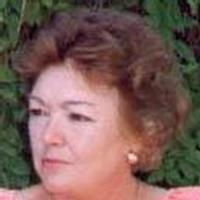 Patricia Nylene Nichols,79, Born March 11, 1936 in Austin, Minnesota to Doris (Hansen) and John Chase. Died February 26, 2016 at her home in Winnebago. Funeral Service will be 10:30AM Friday, March 4, 2015 at the United Methodist Church of Winnebago. Visitation will be 5:00 - 7:00 PM Thursday, March 3 at the Spencer-Owen Funeral Home. Burial will be in the Verona Cemetery at a later date. Patty was raised by her mom and dad, Doris and Lester Lund, along with her siblings, Leonard, Dianne and Jon Robert. She went to school in Bricelyn and Blue Earth, graduating from Blue Earth High School in 1954. She married George Nichols on April 30, 1955 and together they had 5 children, Paul, Ron, Linda, Donna, and Laurie. They later divorced, but George remained the love of her life. She was later married and widowed to Larry Salo, who treated her like a Queen! She lived out the majority of her life in Blue Earth, MN, Roswell, NM, and has resided in Winnebago, MN since 1992. She was a Dental Assistant for many years, working for Dr. John Sawyer for over 20 years in Blue Earth, for Dr. Carlton Walker in Roswell, NM and then Dr. Jerald Thoreson for a few years just prior to her retirement. She was involved in Community Theater for many years in Blue Earth and in Roswell. She was a talented actress, singer, poet, painter and a loving mom and friend. She is survived by her children, Paul Nichols of Winnebago, Ron Nichols and wife Barb of Winnebago, Linda Herschberger and husband Tonn of Blue Earth, Donna Nichols and significant other, Charles Whitney of Winnebago, Laurie Langford and husband David of Winnebago. Sister, Dianne Berg of Blue Earth, 11 grandchildren, 23 great grandchildren plus one more on the way, and 1 great-great granddaughter. Many nieces and nephews, cousins and good friends. Pre-deceased by her parents, Doris Dronen, Lester Lund, and John Chase, her brothers, Leonard Chase and Jon Robert Lund, and her grandson Nicholas DiRenzi. She was blessed by her family and thankful for "her angels", grandchildren Ashley and George Nichols who took loving care of her and allowed her to live out her last days in her own home.
To order memorial trees or send flowers to the family in memory of Patricia "Patty" Nichols, please visit our flower store.