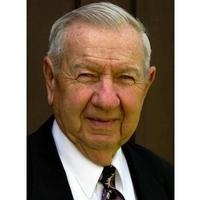 ELMER WILLIAM SCHONROCK, age 89, of Winnebago, passed away Monday, January 11, 2016, at United Hospital in Blue Earth. Funeral services will be held at 10:30am on Saturday, January 16, 2016, at Lutheran Church of Our Savior in Winnebago, with Rev. William Sabol officiating. Burial will be in Riverside Cemetery, Winnebago. Visitation time will be Saturday from 9am until the service time at the church. Web tributes may be left at www.spencerowen.com He was born December 9, 1926, at Beauford Township, MN, the son of Herman and Ida (Nitschke) Schonrock. On February 23, 1952 he married Maxine R. Bates in Winnebago. They lived on the Schonrock farm until 1980, when they moved into Winnebago. After moving into town Elmer continued farming until retiring in 1991. On May 22, 2004 he married Janice Marie (Arickx) Comisky in Winnebago. He was a member of the Lutheran Church of Our Savior serving on the church council, and an usher for many years. He enjoyed bowling, anything to do with farming, the Chicago Board of Trade, and watching his grandchildren in their activities. He is survived by his wife, Janice Schonrock of Winnebago, son, Steven (Janet) Schonrock of Winnebago, granddaughter, Sheila (Robert) Schultz and their children Jake, Brady, and Kali of Delano, MN, granddaughter, Sara (Robert) Southworth and their children Annika, and Kylie of St. Peter, grandson, Matthew (Kristi) Schonrock and their children, Mason, and Karter of Winnebago, granddaughter, Shannon (Colby) Swanson and their children Ella, and Drew of Winnebago, step-children, Colleen (Paul) Tauke of Desoto, IA, Deanna (Jerry) Gard of Algonquin, IL, James (Shelley) Comisky of Atkins, IA, Jason (Christy) Comisky of Ankeny, IA, and 8 step-grandchildren. He was preceded in death by his wife Maxine R. Schonrock, two infant sons, brothers, Arnold, Ervin, Merlin, sisters, Erna Wingen, Betty Dooley, and parents.
To order memorial trees or send flowers to the family in memory of Elmer William Schonrock, please visit our flower store.